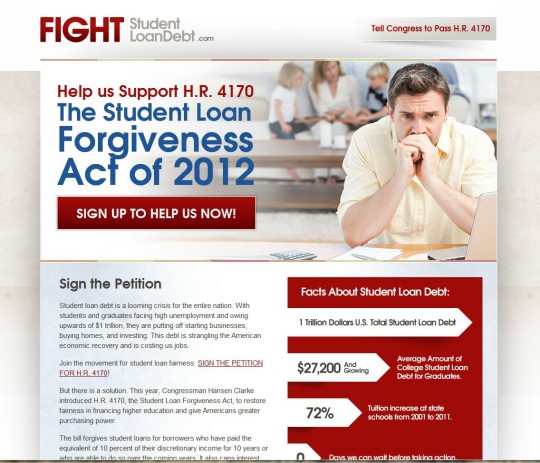 Student loan debt is a national crisis. The amount of outstanding student loans in America dwarfs mortgage debt and credit card debt combined. Americans are on the hook for $1 trillion to cover the ever rising cost of higher education at a time when a degree is more valuable than ever yet wages are stagnate.

One Congressman from Michigan wanted to change this. He worked with a wide coalition of partners to draft legislation to create a fair student loan system in the United States. However, he knew that such a bill would never be taken seriously unless there was a strong push from the people to back it.

We helped the Congressman create FightStudentLoanDebt.com, a targeted campaign site to mobilize Americans to pressure their representatives to support the bill. The site was based in WordPress, leveraging off-the-shelf technology to create a simple petition sign-up form that could be shared across social media to drive more signatures from all over the country.

The site proved to be a resounding success. The petition was merged with one on MoveOn.org, a well-established player in progressive politics, and collected over one million signatures. The Congressman held a press conference on Capitol Hill where he proceeded to deliver each signature to the members of Congress. While the legislation was ensnared in partisan gridlock, the bill generated significant momentum that carried into the next session of Congress